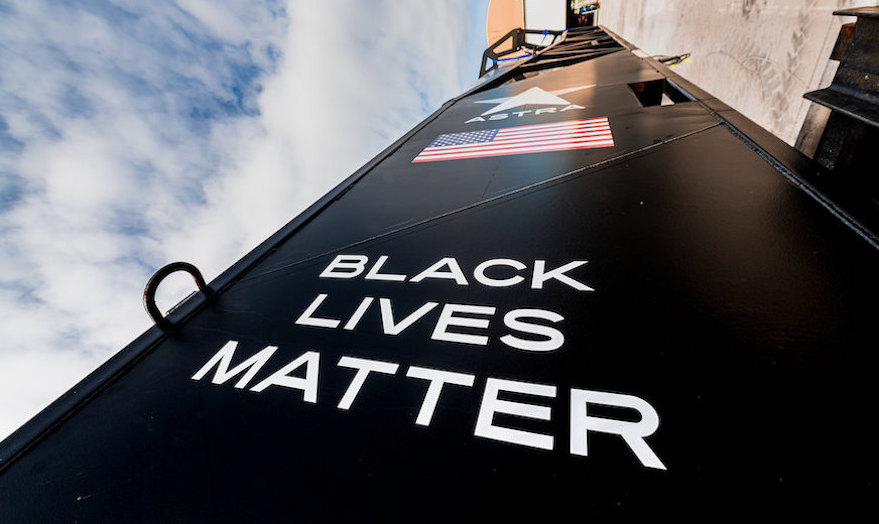 And so we lift our gazes not to what stands between us,

but what stands before us.

We close the divide because we know, to put our future first,

we must first put our differences aside.

We lay down our arms

so we can reach out our arms

At a moment when dystopian futures seem to loom larger than ever, individuals everywhere are trying to make sense of the tragic aftermaths of the past year:  surging cycles of COVID mutations, reams of shocking footage uncoiling deeply ingrained racial injustice, and widening swathes of irreversible environmental destruction heightening in severity. For many it’s been almost too grueling to witness these forces swell far beyond the confines of political discourse, seeing them abet the enemies of the human system who exploit these very challenges and fuel political unrest.

Each day I work with my team at Airbus Ventures to curate the best selection of next-generation innovation, revolutionizing the global economy with advanced technology. But, it has been challenging beyond belief to couple this work with contemplating the profoundly troubled state of humanity. In complete candor, it’s been difficult to not want to abandon a system that has abandoned people everywhere, people of color in particular, violently discarded by a system that has failed too many.

However, listening to Amanda Gorman’s poetic fragments on the day of the presidential inauguration, unearthing unity from the shards of dystopia, I feel graced by rays of hope, with the prospect of lifting our gazes not to what stands between us, but what stands before us.

The 15th century Japanese ritual of Kintsugi, meaning “to join with gold,” perhaps best illustrates the craft of tethering broken parts back together. The 500-year-old practice — painting gold across severed pottery shards — invokes the important work of witnessing splintered fragments as they reunify. A significant reminder to not whitewash the mistakes of one’s past, but rather to commemorate the needed act of striving to fix one’s faults. Or, perhaps, the cracks remain visible for the very reason that we aren’t just trying to form a more perfect union, we are trying to forge a union with purpose.

If a plagued world is to rise above the abhorrence witnessed this past year, it begins with concrete actions rooted in cohesion. In order for environmental uncertainties to start to subside, a strategic bond with the planet must be cemented through cross-border collaboration. For the recent racial injustices targeting African American and Asian American minorities to be addressed, communities must band together to emulate an exceptional, model standard of equality, with a clear and ultra specific commitment to the undeniable significance of life.

Of course, the entire spaceflight enterprise, which has often been portrayed throughout history as a gladiator-style race of nations, is no exception to many of the most severe challenges of our time. As a deep space investor, I find myself

witnessing a dangerous impulse to increasingly nationalistic competition in space, a growing distrust of international framework agreements, and a repression of the global talent and mobility so essential to the entrepreneurialism embodied by the founders with whom we work so closely every single day.

Once unthinkable during Earth’s first Space Age, national governments now seek claims to the common heritage of humankind. The then-obvious measures mitigating against the weaponization of space from the first years of the Space Age are now threatened with abandonment. The greatest and most critical planetary projects, from maintaining habitable climate and avoiding asteroid impact destruction, which can be the pinnacle of peace-building opportunities for collaboration, with the wrong twist of inimical energies can also threaten to end planetary civilization.

There is a perhaps instructive irony that the totems and shafts of national power in the first Space Age are today disintegrating, made threadbare by natural planetary processes. Representing one of humanity’s most extraordinary technological achievements, on the Moon today American and Soviet artifacts of the first Space Age suffer “unfiltered UV radiation, micrometeorites, and other ‘space weathering.’” Many experts determine that these significant historical objects, if not “tattered to shreds from regolith and micrometeors, are probably bleached white or gray by now,” Forbes contributor Kiona Smith writes.

At the end, all that’s left are ghostly figments of political symbols, frayed signifiers of public power subject to galactic forces far greater than the dangers of national theater.

In this age of deep uncertainty, it’s tempting to abandon a system that has violently discarded too many. But that is too easy and blind to the real rays of hope. In an era where our planet is at risk of succumbing to dangerous forces threatening to end planetary civilization, as a human, I cannot stand on the sidelines of impending planetary crises.

It’s pivotal that there is a shift of focus to the power and prospect of international, cross-border, and multicultural approaches to space development — right in the face of the nationalization and weaponization of space development. We must ignite a multilateral approach to adaptive innovations across the ecosystem.

There is boundless potential tucked in the shadows of the word we. Together, we shouldn’t rely on a brand of idealism orbiting the circumference of isolated success. No one nation or company can pioneer humanity’s greatest expedition alone. It requires true teamwork powered by humility.

As we launch into a new era, let this next chapter rest on the shoulders of this shared culture, accelerated by the brilliant synergies of the collective mind. Let our story be fueled by an entwined force of curiosity and aggregate intelligence, resting on the heritage of humankind and interlaced with the shared values we as humans hold dearest. We close the divide because we know, to put our future first, we must first put our differences aside.

Thomas d’Halluin is the managing partner of Airbus Ventures, based in Silicon Valley, with offices in Tokyo and Toulouse.

Researchers Find That Atomic Nucleus Is Thin Skinned
Discord is rapidly expanding beyond gaming, attracting suitors like Sony and Microsoft
The error-prone step at the heart of making an embryo
Tesla Director Of Energy On Transition To Renewables: “It’s Happening Quickly”
NASA reboots its role in fighting climate change