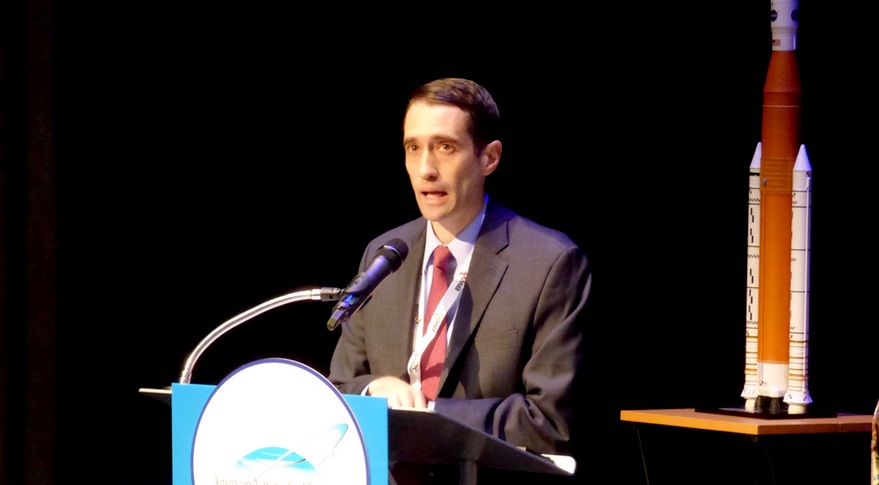 HUNTSVILLE, Ala. — The Pentagon official responsible for space policy says he expects an “exciting and interesting discussion” in Congress next year when the House and Senate take up the administration’s proposal to establish a Space Force.

In a speech at the American Astronautical Society’s Wernher von Braun Memorial Symposium here Oct. 25, Stephen Kitay, deputy assistant secretary of defense for space policy, said the administration would submit a legislative proposal in February, as part of the fiscal year 2020 budget request, to authorize creation of the Space Force as a separate branch of the military.

“This will be a force that is focused on space and the space needs of our combatant commands,” he said of the Space Force. “This force will train and grow national security space professionals and will develop the doctrine and capabilities needed to enable the joint warfighter and ensure that we can fight and win should warfare extend into space.”

The Space Force is part of a broader reorganization of military space capabilities that also includes reestablishing a U.S. Space Command and creating a new Space Development Agency to handle space acquisition. Those efforts, Kitay said, are linked to the overall national defense strategy, including concerns about the growing threats posed by China and Russia in particular.

“Why do we need to implement these ambitious space reform initiatives?” he asked. “Great power competition is now the primary focus of U.S. national security, and we cannot afford to lose space in this competition. Space power is integral to our national security, our economy and our way of life.”

While the Defense Department can undertake many of these planned reforms on its own, creating the Space Force will require authorization from Congress. That proposal could face challenges there, particularly if Democrats take control of the House or the Senate in next month’s midterm elections. Rep. Adam Smith (D-Wash.), the ranking member of the House Armed Services Committee and in line to take over the committee if Democrats retake the House, said last month he didn’t think the Space Force was the most effective way to improve how the Pentagon handles space.

Democrats have “a great deal of skepticism” about the proposed Space Force, said Rep. Don Beyer (D-Va.) during an Oct. 23 panel discussion at the Washington Post’s “Transformers: Space” event in Washington. “I think most people are taking, at least on the Democratic side, a wait-and-see attitude, recognizing that Russia and China are doing lots of things in space, lots of things we don’t know about, some of which may have military aspects.”

“There’s a sense of let’s move cautiously, thoughtfully forward, in order to make sure that we’re securing our assets,” said Beyer, who deals with civil, but not military, space issues as a member of the House Science Committee. “We don’t want to accelerate the militarization of space at all, but we also don’t want other people to do that while we’re sitting helpless.”

Kitay, who was previously a staffer on the House Armed Services Committee’s strategic forces subcommittee, said that in his experience there that members had a “deepening understanding” of both the importance of space to national security and the threats those capabilities face. However, he argued more needs to be done to make members aware of those issues.

“We’re working to make sure that we educate Congress and the American people more about the series nature of those threats and the importance of space,” he said.

Asked about the prospects of getting Congress to approve a Space Force, Kitay declined to offer a specific assessment. “I think it’s going to be an exciting and interesting discussion” there once the administration delivers its legislative proposal, he said.

Kitay said the need to educate about space threats extends beyond Congress to the broader public, who he believes don’t fully understand the importance of space to national security and thus are subject to “misinformation” about what a Space Force would do.

“There is a lot of misinformation out there and it can be the butt of late-night jokes,” he said. “The fact of the matter is, I think, that people don’t necessarily understand what we’re talking about. They don’t understand how these satellites are critical for national security and our way of life. This is not about Marines dropping out of space or fighting aliens or X-wings and TIE fighters.”

“I think the best thing to do is to continue the education process,” he said, citing as one example the meeting two days earlier of the National Space Council that was devoted almost entirely to national security space and plans to create the Space Force. “I think we still have a long way to go to educate the public.”