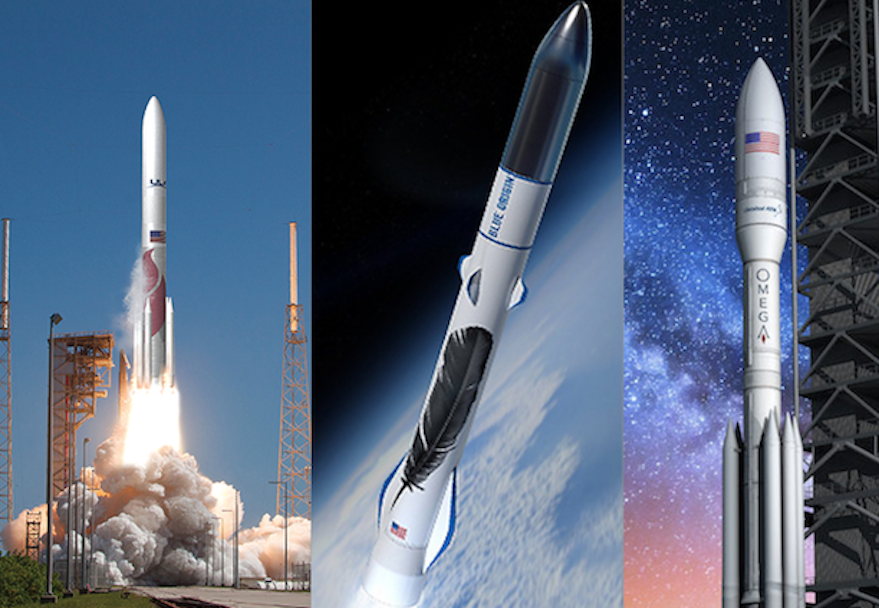 House Armed Services Committee Chairman Adam Smith is said to be unsatisfied with the Air Force’s response to his concerns about the Launch Service Procurement competition.

WASHINGTON — A war of words between the chairman of the House Armed Services Committee and the Air Force over a multibillion-dollar national security launch services competition appears to be escalating.

Chairman Adam Smith (D-Wash.) in a  March 28 letter asked Air Force Secretary Heather Wilson to delay the Phase 2 Launch Service Procurement and reconsider its plan to request bids this month and select two providers in spring 2020, a schedule that Smith believes is rushed and does not allow for a “fair and open competition.”

Wilson wrote back on April 25, explaining that the Phase 2 Launch Service Procurement (LSP) must get underway immediately, and that any further delays would prevent the Air Force from fulfilling a congressional mandate to stop using rockets that have the Russian RD-180 engine.

The launch procurement is called Phase 2 as it is the second phase of the program previously known as the Evolved Expendable Launch Vehicle, recently renamed National Security Space Launch. In Phase 1, United Launch Alliance was the only provider of national security launches. In Phase 1A, SpaceX entered the field. In Phase 2, the plan is to select two vendors from a field that would include ULA and SpaceX, was well as new entrants Blue Origin and Northrop Grumman.

“The time is right to start the Launch Service Procurement competition by releasing the request for proposals now in order to select the two best-value offers next spring … and meet the deadline set by Congress to end our reliance on the RD-180 engine,” Wilson said in the letter.

The final RFP the Air Force is ready to release is “clear, fair and will enable us to select the best two launch service providers that can meet all national security space requirements,” Wilson stated. “All potential offerors have sufficient maturity and we expect a robust full and open competition.”

Smith is said to be unsatisfied with Wilson’s response and is weighing what steps to take next, a committee official told SpaceNews. “The Air Force response does not address the chairman’s original concerns, so our team here will be working through options for how to respond.”

Although Smith did not mention specific companies in his letter to Wilson, his plea echoes complaints made by Blue Origin, based in Smith’s home state.

Smith urged Wilson to delay the RFP until his concerns are addressed and there is “further clarity on a path forward that maximizes fair and open competition.”

The issues that Smith wants resolved relate to both the schedule and the criteria by which vendors would be evaluated in Phase 2.

Blue Origin, along with United Launch Alliance and Northrop Grumman, in October were collectively awarded Launch Service Agreement contracts worth $2.3 billion to help partially fund the development of their vehicles and build the infrastructure to launch national security payloads. The LSA funds are spread over six years and those vendors that are not selected for Phase 2 in 2020 will no longer receive LSA money. All three LSA winners are developing new rockets, none of which will fly until 2021. Phase 2 launches would begin in 2022.

Smith complained that the LSA awards were made more than a year later than expected, so the selection of two vendors for Phase 2 should have been deferred to allow competitors to time to invest their LSA money in vehicle development and launch pad construction.

ULA and Northrop Grumman officials said they support the schedule set by the Air Force. SpaceX has not commented publicly. The company already has mature rockets and has no issues with the LSP schedule, although it has not yet confirmed whether or not it will submit a bid, industry sources said. So a delay would primarily benefit Blue Origin which, according to these sources, worries that its New Glenn rocket will not be ready on time.

At stake is a five-year commitment from the Air Force to buy approximately 25 launches from fiscal years 2022 to 2026. One winner will get 60 percent of the missions, the other 40 percent. The Air Force and the intelligence community are projected to spend about a billion dollars a year on national security launches.

One potentially controversial item in the RFP is a provision for the use of a backup vehicle if the newly developed rockets of the two vendors selected are not ready to fly national security missions by 2022. Industry sources who have reviewed the third draft RFP said the Air Force would allow vendors to offer an alternative launch vehicle — if the rockets that are now in development are not ready — rather than solicit competitive bids for a replacement. Blue Origin and SpaceX have objected to this provision as it would clearly favor ULA, the only competitor that has an alternative vehicle. If ULA’s new rocket, the Vulcan Centaur, was not ready to fly by 2022, the company could offer the Atlas 5 as a backup. Congress set a Dec. 31, 2022, for the Air Force to stop using the Atlas 5 which has the RD-180. As long as contracts are awarded before that date, the missions could be flown in 2023 or 2024.

An industry source said SpaceX and Blue Origin view this provision as an “escape hatch that takes ULA out of any schedule risk” and gives the company a significant advantage. “The RFP provides a way to continue to use RD-180s,” the source said. “It’s quite sneaky.”

Smith cited the alternative launch vehicle provision as a sign that the Air Force is not confident the new rockets will be ready to fly by 2022 and should therefore postpone the vendor selection. Smith also complained about a “lack of clarity” in the evaluation criteria. The draft RFP calls Phase 2 a “best value” procurement and gives the Air Force ample discretion to decide who fits the bill.

In her letter to Smith, Wilson did not get into the specifics of the selection criteria. She praised the Air Force’s track record in national security launches and its efforts to comply with Congress’ 2014 directive to transition off the RD-180 and ensure there’re two domestic providers.

Wilson said the Air Force has taken a “measured approach” to minimize risk in Phase 2, such as procuring three more Delta 4 heavy launches from ULA to allow more time for competitors to mature propulsion systems for their heavy rockets. Allowing alternative vehicles is simply “practical risk mitigation for unforeseen delays,” she wrote. “We will allow awardees to use ‘secondary launch systems’ for the first two years of the Phase 2 LSP.”

The Air Force has meticulously gone through 1,500 comments received from vendors over three rounds of draft RFPs and one-on-one meetings, Wilson said. The RFP was “assessed by several rigorous independent reviews including a business clearance review led by the deputy assistant secretary of the Air Force for contracting.”

While Blue Origin has gained a powerful ally in HASC Chairman Smith, ULA enjoys widespread congressional support. Twenty-eight lawmakers signed an April 12 letter to Wilson urging her to stick with the schedule and with the Phase 2 LSP strategy. “We commend your decision to allow all U.S. launch providers to compete for Phase 2 missions and request you do everything in your power to keep the acquisition on schedule,” the letter said. “Additionally, we ask that you refrain from weakening any performance requirements. It is critical that you limit Phase 2 missions to two providers.”

ULA’s allies are pointing out that Smith’s view has not been consistent on the launch schedule. Two years ago he was concerned that the launch competition was not moving fast enough and now he is asking for a delay, an industry source said, presumably because that would benefit Blue Origin. The source recalled that Smith on October 5, 2017, when he was the HASC Ranking Member, sent a letter to Wilson urging her to release the RPF for the Launch Service Agreement program without further delay. The release of the RFP at that point was 10 months behind schedule.

Smith wrote back then that the LSA “appears to be the most promising approach to ultimately have two or more U.S. commercial launch providers that can meet national security needs … and ensure the United States has access to space without relying on the RD-180.” He also noted that the slippage in the release of RFP “has led to a very compressed schedule for the LSA competition and for the launch services procurement competition that will allow a competitive selection of two providers for national security launches.”

Draft RFPs for the Phase 2 competition were issued in December and February. A third draft was distributed to vendors but not released publicly. Air Force officials had intended to put out the final RFP in late March but have not received the final go-ahead from Undersecretary of Defense for Acquisition and Sustainment Ellen Lord, who has overall authority for the Air Force national security launch program. Air Force officials said they are ready to move forward as soon as possible.

According to industry sources, the final RFP addressed some of the concerns expressed by Blue Origin and SpaceX in one-on-one meetings about the evaluation criteria being too vague and not giving enough weight to price. The Air Force reportedly simplified the selection criteria, making the evaluation of price slightly more important than it was before.

Both SpaceX and Blue Origin are said to have communicated to the Air Force that they believed the selection approach was too subjective, as the government would pick two providers based on their combined “best value.” That makes it virtually impossible for bidders to understand how that decision will be made, one industry source said.

The Air Force also is said to have downgraded the importance of commercial viability as a selection factor. One of the original goals of the launch service procurement was to ensure the Air Force has two viable suppliers that are commercially successful, and the Air Force would assess launch vehicles based on whether they would be commercially viable.

The industry source said the third draft of the RFP removed commercial viability as a consideration. This was another sore issue for SpaceX which is the most commercially successful launch company and expected to turn that into an advantage over its competitors. ULA so far has had little commercial business, and Northrop Grumman been insistent that its OmegA rocket is being built for the national security market and its commercial business outlook remains unclear.

If the Air Force in fact is shifting its thinking about the importance of commercial viability in its selection of launch providers for Phase 2, that could create a similar scenario as the EELV program in the 1990s, the industry source said. The government could end up selecting rockets that are not commercially competitive and that could mean higher prices for the Air Force. The idea that the Air Force would not give higher priority to a provider’s business outlook would be a “strange outcome.”

The surprising reason the moon has fewer craters than it probably should
Space sustainability makes slow progress at the United Nations
We May Have Detected Another Hint of Gravitational Waves in Pulsing Stars
Bill Gates secures hundreds of millions from U.S. firms for climate fight
COVID vaccine immunity is waning — how much does that matter?