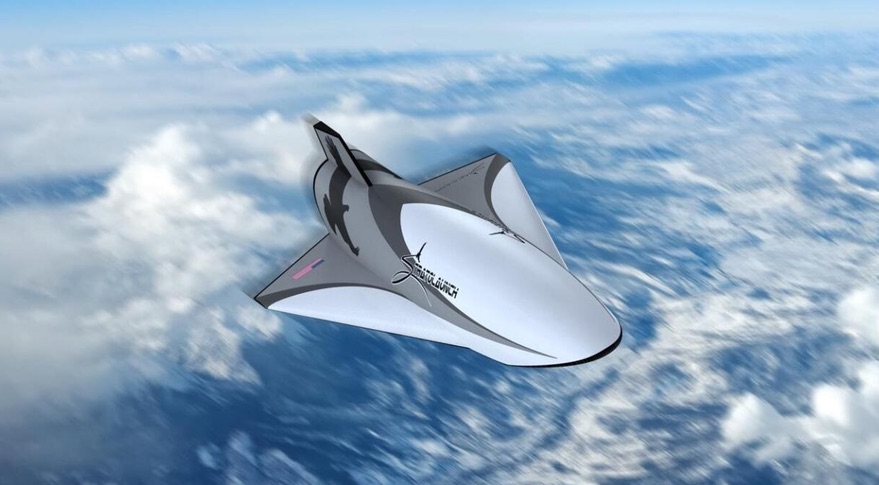 WASHINGTON — Stratolaunch, the company founded by the late billionaire Paul Allen as an air-launch company, announced March 30 it is developing a reusable hypersonic vehicle designed to be launched from the company’s giant aircraft.

Stratolaunch said it is pursuing development of a vehicle called Talon-A. That vehicle, powered by a liquid-propellant rocket engine, will launch from the company’s aircraft and fly to speeds of Mach 5 to Mach 7 before gliding back to a runway landing. It will also be able to take off on its own from a runway under rocket power.

“The Stratolaunch Talon-A is a flexible, high-speed testbed built for offensive hypersonics, hypersonic defense and hypersonic R&D,” the company said in a fact sheet about the program. That document emphasizes the vehicle’s ability to provide “here-to-fore unobtainable measurement access to the hypersonic flight environment on a recurring basis.”

“Our hypersonic testbeds will serve as a catalyst in sparking a renaissance in hypersonic technologies for our government, the commercial sector and academia,” Jean Floyd, chief executive of Stratolaunch, said in a statement on the company’s updated website.

The company said it expects an initial operating capability for the Talon-A in 2022. By 2023, Stratolaunch plans to support multiple Talon-A missions on a single flight of its aircraft, with as many as three Talon-A vehicles carried by the plane at once. “This unique capability enables multiple hypersonic flight opportunities on a single day or the near-simultaneous launch of three Talon vehicles, which may support specific operational scenarios,” the company said.

The vehicle will be 8.5 meters long with a wingspan of 3.4 meters and a total mass of about 2,720 kilograms at launch. Stratolaunch did not disclose details about the vehicle’s propulsion system, including whether the engine will be developed internally or purchased from another company. The company also did not disclose the estimated cost to develop the vehicle.

The announcement confirms Stratolaunch’s pivot from a launch services company to one that will provide high-speed flight test services. Allen founded Stratolaunch in 2011 to serve as an air-launch company, cycling through a series of different rocket designs before deciding to use the existing Pegasus XL rocket from Northrop Grumman.

After Vulcan, Allen’s holding company, sold Stratolaunch to private investors led by Cerberus Capital Management in October, the company suggested a shift in focus to hypersonics research. In January, the company confirmed it was interested in hypersonics testing using its aircraft after a conference paper from 2018 outlining some designs for hypersonic testbed vehicles resurfaced online.

“Our business plan is built around the operation of a fleet of vehicles with both government and industry customers,” Mark Bitterman, vice president for government relations and business development at Stratolaunch, said March 4 at a conference in Colorado. “What we’re looking at essentially are customizable, reusable and affordable rocket-powered testbed vehicles, and associated flight services.”

Bitterman said at the conference that Stratolaunch was not planning to pursue orbital launch opportunities for at least several years. “Our near-term plan — say, five to eight years — is not to launch satellites to LEO,” he said.

The company, though, is leaving the door open for future launch services. Besides Talon-A and a second hypersonic vehicle, Talon-Z, about which the company says is only “in development,” Stratolaunch’s website also includes a spaceplane called Black Ice, a holdover from the company’s earlier launch vehicle development plans.

“Black Ice is a fully reusable space plane that enables advanced on-orbit capabilities and cargo return,” the company said, initially designed for cargo but with “a follow-on variant capable of transporting crew.” The company offered no timetable for developing Black Ice.

All those vehicles will depend on Stratolaunch’s aircraft, which made its first, and to date only, test flight nearly a year ago. Bitterman said at the conference that Stratolaunch plans to resume test flights of the plane in September as part of work to win certification from the Federal Aviation Administration.

Shedding light on the interfaces – Physics World
After many centuries, bamboo still has a role to play in the construction sector
Aaron Levie: ‘We have way too many manual processes in businesses’
Oil prices rise on supply cut hopes, easing of coronavirus lockdowns
U.S. states sue Trump administration over fuel efficiency rollback