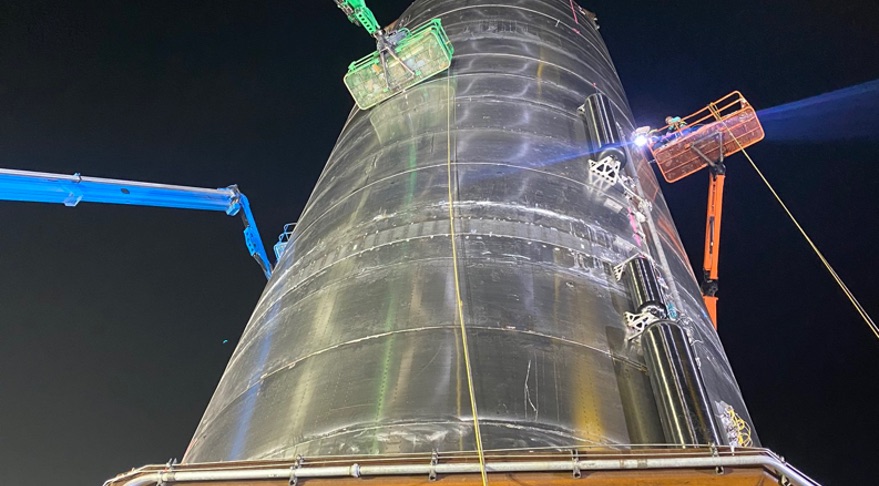 WASHINGTON — For the third time in less than five months, a prototype of SpaceX’s Starship next-generation launch vehicle was destroyed in a test at the company’s South Texas facilities April 3, although this failure may an issue with the test itself.

The Starship SN3 vehicle was on the pad at SpaceX’s test site at Boca Chica, Texas, in the early morning hours of April 3 for a cryogenic tanking test, where the vehicle’s propellant tanks are filled with liquid nitrogen. Shortly after 3 a.m. Eastern, the cylindrical vehicle appeared to crumple about halfway up, causing the top part of the vehicle to topple.

The accident marks the third time a prototype of Starship failed that cryogenic tanking test. In November 2019, the Starship Mark 1 vehicle suffered a bulkhead failure during a similar test, sending debris flying. The company said at the time that the incident took place in a test intended to “pressurize systems to the max, so the outcome was not completely unexpected.”

A second Starship vehicle, SN1, was also destroyed in a cryogenic tanking test Feb. 28, this time with the vehicle bursting near its base. Elon Musk, founder and chief executive of SpaceX, said that the failure in that test appeared to be with a “thrust puck” at the base of the tank that takes the load from the vehicle’s Raptor engines.

SpaceX decided to strip the next Starship vehicle, SN2, down to that tank to test the performance of the thrust puck weld. Those tests took place in early March without incident.

Musk, in a tweet shortly after the Starship SN3 incident, suggested the failure may have been caused by a problem with the test itself. “We will see what data review says in the morning, but this may have been a test configuration mistake,” he wrote.

Had the tanking test been successful, SpaceX was preparing to perform a static-fire test with Starship SN3. The Federal Aviation Administration issued a notice to airmen, or NOTAM, April 1 for the area around the test site for April 6 through 8, consistent with a static-fire test of the vehicle.

That static-fire test may have been followed by a low-altitude “hop” test, similar to the August 2019 flight of its Starhopper prototype, where the vehicle flew to an altitude of about 150 meters before landing on a nearby pad on the one-minute flight. That test would have required an experimental permit from the FAA’s Office of Commercial Space Transportation, which has yet to be issued.

Starship is the upper stage of the company’s next-generation launch system that is intended to be fully reusable and support both cargo and crewed missions. With a booster called Super Heavy, Starship will be capable of carrying large payloads into Earth orbit and beyond.

A crewed version of the vehicle, the guide states, can accommodate up to 100 people with “private cabins, large common areas, centralized storage, solar storm shelters and a viewing gallery.” SpaceX plans Starship launches from both Launch Complex 39A at the Kennedy Space Center and its Boca Chica facility in Texas. The guide, though, did not offer a schedule for beginning such missions, or estimated prices.