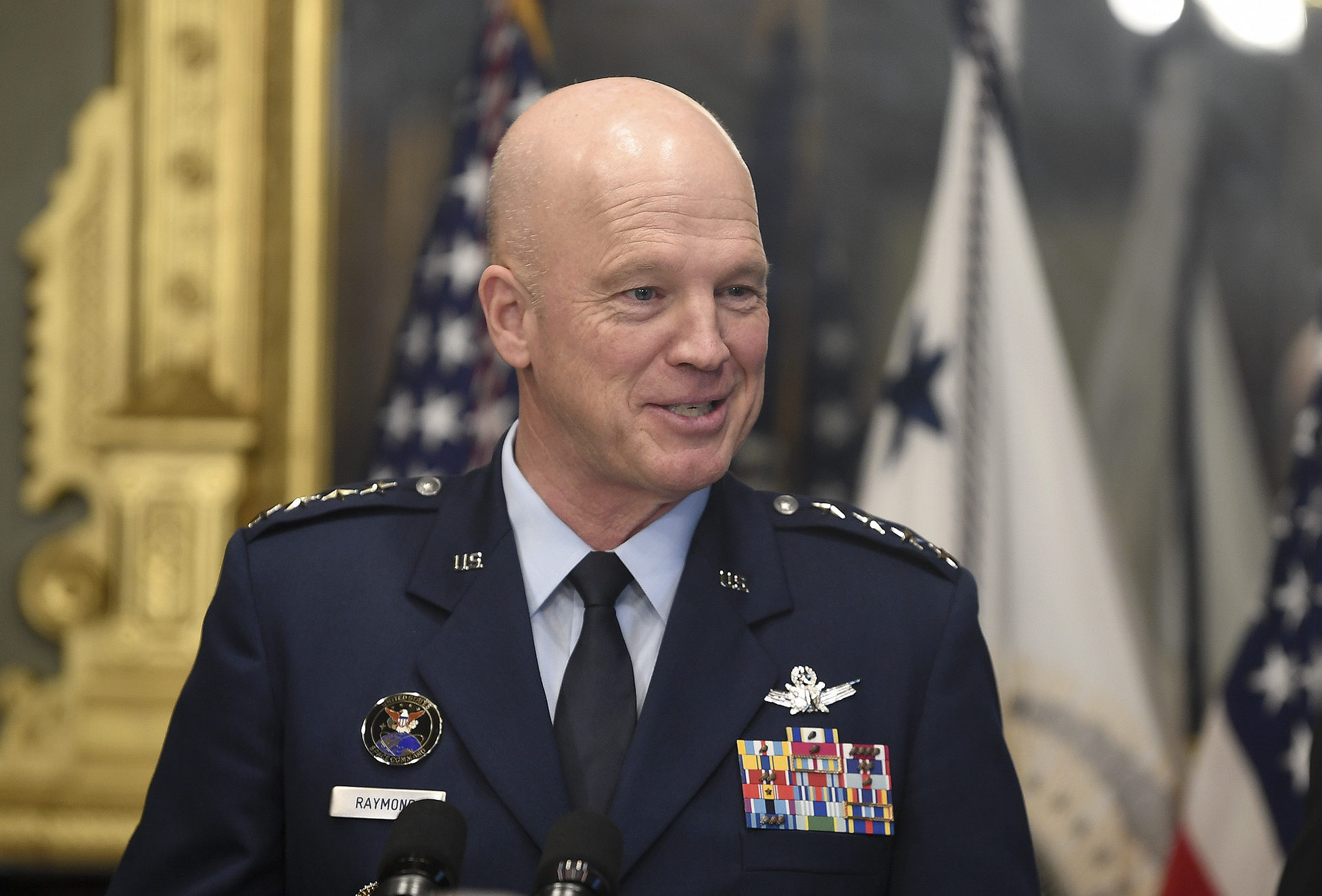 In an exclusive interview, Gen. John Raymond, the first chief of space operations for the U.S. Space Force, talks about the initial steps in organizing the new service.

Two days after being sworn in by Vice President Mike Pence as chief of space operations, Raymond remains, for now, the only official member of the newest branch of the U.S. armed forces. The Space Force was signed into law Dec. 20 by President Donald Trump.

“There is a lot of planning going on,” Raymond told SpaceNews Jan. 16 in his first media interview since becoming chief of the U.S. Space Force.

Raymond and Defense Secretary Mark Esper on Jan. 15 briefed Trump on the initial steps in the organization of the Space Force.

“I thought it was important that we give him an update on what we did on day one and where we’re headed,” Raymond said. “It was a really good conversation.”

It was Trump who directed the Pentagon in June 2018 to establish a U.S. Space Force but it wasn’t until Congress passed the National Defense Authorization Act and the president signed it Dec. 20 that the sixth branch of armed forces came into being. “This is the president’s vision,” said Raymond. ‘We’re moving out to implement it.”

Raymond reports directly to Air Force Secretary Barbara Barrett. For the next year, he will be dual-hatted as commander of U.S. Space Command and chief of the U.S. Space Force. He oversees staffs in Colorado Springs and in the Pentagon that are helping plan the new service. “There are a lot of decisions to be made,” he said.

The Space Force eventually will have its own uniforms, logo and seal that will become part of the service’s unique identity. These are still being designed, he said. “We’re working that really hard.”

“It has been helpful to be dual hatted,” Raymond said. That allows him to “make trades” as both U.S. Space Command the U.S. Space Force get built out. After the first year, someone else will be nominated to run the Space Force. “Splitting the hats is absolutely the right thing to do to get singular focus on the warfighting side and singular focus on the organize-train-equip side,” he said. The one-year transition “gives us a grace period to make that shift.”

Maj. Gen. Stephen Whiting is the deputy commander of the U.S. Space Force based in Colorado Springs. At the Pentagon, Lt. Gen. David “DT” Thompson serves as the vice commander. In the future someone will be nominated to be the vice chief of staff of the Space Force. “We haven’t begun to work that yet,” Raymond said.

The Pentagon-based staff now has about 40 people but will grow to 200 by March. The first official hire was a civilian to oversee personnel administration and policy.

Patricia Mulcahy, a member of the senior executive service who was deputy assistant secretary of the Air Force for force management integration, is now the head of personnel for the Space Force. This is a key hire, said Raymond, as Mulcahy will help “open up the processes to bring the others on board.”

The plan is to transfer thousands of airmen who currently perform space duties into the Space Force. On Dec. 20, Barrett assigned to the Space Force 16,000 airmen and civilians who worked under Air Force Space Command. But none of them, other than Raymond, have yet left the Air Force.

“Some of those airmen will come off the books of the Air Force and into the Space Force. And some won’t,” said Raymond. Identifying what units will join the Space Force is part of the planning that is now under way. In addition to personnel from the former Air Force Space Command, training units based at Vandenberg Air Force Base, California, as well as science and technology labs might be moved over. Compared to the other branches, said Raymond, the Space Force will be “more of a technology focused service.”

Another goal is to bring in members of the other military services. “One of the homework assignments is to come back with a proposal to Congress for next year to open this up to other services,” said Raymond. There will be a plan to integrate National Guard and Reserve forces as well. “We rely very heavily on the Guard and Reserves today,” he said. “We’re going to figure out the best way to utilize those forces.”

There is no playbook
The United States hasn’t established a separate service since 1947 when the Air Force was stood up. “It’s not like there was this playbook that said ‘step one do this,’” said Raymond.

Many people are curious about the uniforms, the logos and the patches, but there is so much more that goes into creating a service. “What do you call an airman that’s in space? Eventually we’ll have to have a service song. There’s lots of different thoughts,” he said. “Some pieces are imminently going to be announced. Other pieces are going to take a couple of months as we continue to refine things.”

What field commands will be created under the Space Force is another key decision. A group of 120 military and civilian leaders last week met to discuss possible field organizations. “I’m not ready to announce any decisions yet,” said Raymond. “We’ll continue to refine it.”

The Space Force could end up with three major field organizations but that is still being debated. One would be focused on operations, another on acquisitions and a third on training and professional development. Barrett on Dec. 20 re-designated the 14th Air Force as Space Operations Command, which would be one of the field organizations. The acquisition command would absorb the Space and Missile Systems Center and other smaller organizations.

The NDAA directed the establishment of a Space Acquisition Council and created a new assistant secretary of the Air Force for space acquisition and integration position.

How the Space Force will organize its acquisition office is now being deliberated, said Raymond. “We’ll present that to Congress” in the coming months. The goal is to create an organization that will be nimble and move faster than traditional military procurement offices.

“I expect over the coming months we’ll work to rename those,” said Raymond.

The Air Force however will continue to run those bases. “We are not transferring into the Space Force all the support functions that would be needed to run bases.”

Raymond said renaming bases is one of many changes that will help build a space-focused culture that over time will shape the identity of the service.

“There’s so much excitement,” said Raymond. The number-one question he gets asked is “how do I join?” he said. The Space Force has an opportunity to attract recruits who typically would not think of joining the military but are passionate about space, said Raymond. “We have a lot of people knocking on our door wanting to be part of this.”

Some have expressed concern that space programs and activities that have been advanced by the Air Force will be slowed down or disrupted because of the reorganization.

That is a valid concern, said Raymond. He constantly reminds his staff to “keep your eye on the ball,” he said. “I actually believe there’s a going to be a level of disruption any time you do a reorganization of this size.”

Air Force Space Command over the last couple of years had been undergoing change before it became a separate U.S. Space Force. “We are evolving because the strategic environment of space is evolving. It’s no longer a benign domain, it’s a warfighting domain. And that requires significant change across the board in how we train, how we develop people, what architectures we have. All this is being laid out.”