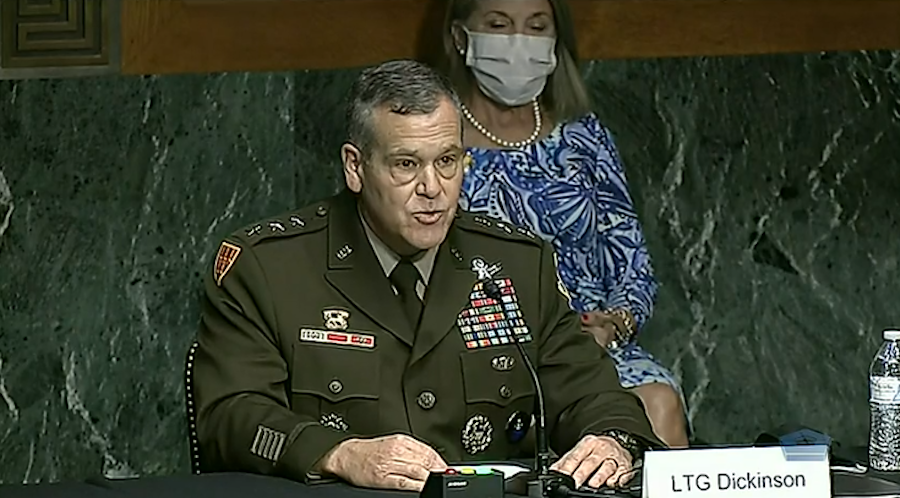 Dickinson said “norms of behavior” should be established for space domain.

WASHINGTON — The United States has to work with other countries to establish “norms of behavior in space,” Army Lt. Gen. James Dickinson told the Senate Armed Services Committee during a July 28 confirmation hearing to be the next commander of U.S. Space Command.

Dickinson is currently deputy commander of U.S. Space Command. He was nominated by President Trump for promotion to general and to replace Gen. John “Jay” Raymond as head of the newly established combatant command focused on space operations.

In response to questions from the committee’s Ranking Member Sen. Jack Reed (D-R.I.), Dickinson said U.S. Space Command has been closely watching Russia’s and other countries’ attempts to flex muscle in space and the command is prepared to respond to aggression against U.S. satellites if need be.

“We have to hold our competitors accountable for their actions in space,” said Dickinson. “We have professionals looking at that every day using our space domain awareness capabilities to understand what our competitors are doing.”

He compared space to the maritime domain where nations have to comply with the rules of international waters. “We’re working on establishing norms of behavior in the space domain,” said Dickinson.

The SASC held a joint confirmation hearing for Dickinson and for Air Force Lt. Gen. Glen VanHerck who was nominated for promotion to general and to serve as the next commander of U.S. Northern Command.

Dickinson became deputy commander of U.S. Space Command in December 2019. He previously was the commander of the U.S. Army Space and Missile Defense Command.

But he noted that the United States and Russia cooperate in space exploration and scientific research. “These areas offer possible avenues for communication and cooperation to counter Russia aggression,” Dickinson noted. “Russia is making considerable gains, and our operational advantage is shrinking.”

The same concerns apply to China, he said. “China continues to develop a variety of counterspace capabilities designed to limit or prevent an adversary’s use of its space-based assets during a crisis or conflict.”

How Livongo and Teladoc closed an $18.5 billion deal during a pandemic
Microsoft, TikTok don’t need to make sense if deal is too good to pass up
We have ploonets. We have moonmoons. Now hold onto your hats for… blanets
Oil prices fall as rising coronavirus case numbers cast shadow over fuel demand pickup
Rocket Lab blames Electron launch failure on electrical problem