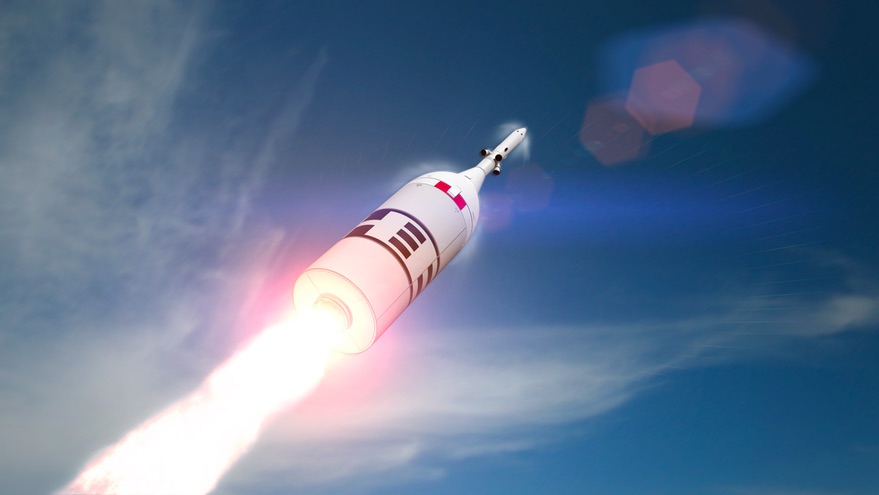 WASHINGTON — The next major milestone in the development of the spacecraft designed to take humans back to the moon will be a three-minute test flight this week to ensure astronauts can escape in the event of an emergency.

In the test, a refurbished solid rocket motor from a Peacekeeper missile, carrying an Orion spacecraft mockup, will lift off from Space Launch Complex 46. Fifty-five seconds after launch, at an altitude of nearly 9,500 meters and speed of Mach 1.3, controllers will trigger the capsule’s launch abort system (LAS), a tower mounted on top of the capsule, pulling it and the capsule away from the booster to simulate an abort during a Space Launch System flight.

Three sets of rocket motors will fire on the LAS during the test. The first will be the abort motor, producing 400,000 pounds-force of thrust to quickly pull the capsule away from the booster. An attitude control motor at the top of the tower then reorients the capsule. Finally, a jettison motor will separate the LAS from the capsule, which will fall into the ocean.

The test is designed to simulate conditions at maximum dynamic pressure, or “Max Q,” during an SLS launch. “That’s covering that corner of the box to prove out that the system can really handle the whole spectrum of what we need to put it through,” said Blake Watters, principal engineer for Orion abort and jettison motors at Lockheed Martin, in an interview.

Development of the LAS dates back to Orion’s origins in the Constellation program more than a decade ago, and the system performed a successful pad abort test in 2010. “Essentially, after this we’ve shown the LAS is good for everything we hope it to be,” Watters said.

While the test will make clear how well it performed, the vehicle is heavily instrumented. That data will be downlinked immediately, although the Orion capsule will also jettison a set of data recorders after the LAS separates that will be recovered from the ocean. “There will be a lot of data crunching that we do in the months after the test,” he said, such as the effects of the sudden acceleration and rocket plume impingement on the spacecraft.

“The data that we’re collecting is crucial to verifying the models and show that the system is capable of protecting crew in the event of an emergency,” said Jennifer Brown, principal engineer for the attitude control motor for the LAS at Lockheed Martin. “This test is really critical to prove out the launch abort system.”

The Orion capsule flying this mission is a boilerplate spacecraft intended only to simulate the size and mass of the capsule, and is not equipped with internal systems found on an Orion. “You couldn’t stick an astronaut in it,” said Watters. “It is really just there to represent what a launch abort system would pull away.” The capsule will fall back to the ocean, without parachutes, and will not be recovered.

The U.S. Air Force is providing the Peacekeeper motor for the AA-2 test. That motor is able to accelerate the capsule to conditions like it will see at Max Q during SLS missions. “The Peacekeeper ICBM motor was also selected because it provides suitable reliability for this test at a cost savings for the government,” said Lt. Col. Ryan Rose, chief of the Space and Missile Systems Center’s Small Launch and Targets Division at Kirtland Air Force Base, New Mexico, in a statement.

“This test is the culmination of many, many years of hard work, and many organizations coming together to make this happen. It’s really going to be exciting to see an abort performed during ascent,” Brown said.