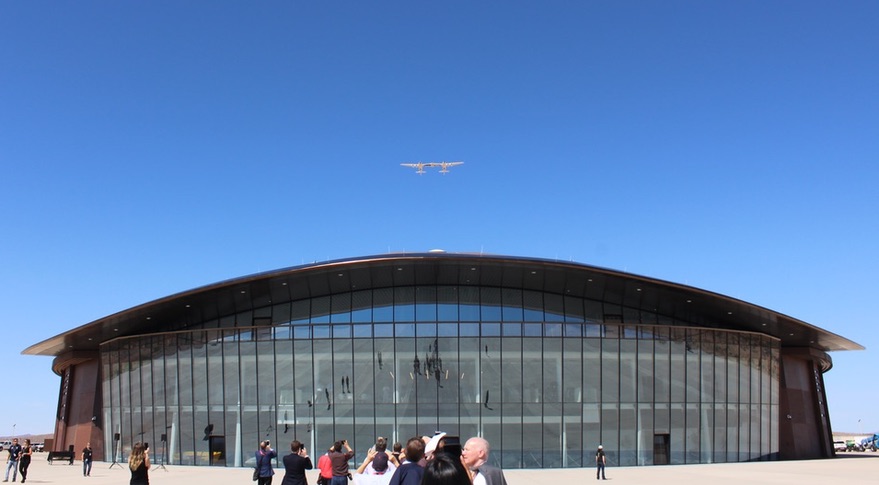 SPACEPORT AMERICA, N.M. — As Virgin Galactic prepares to finish the test program for its SpaceShipTwo suborbital vehicle, the company says the New Mexico spaceport it will operate from is ready.

At an Aug. 15 media event at Spaceport America, located in the New Mexico desert north of the city of Las Cruces, executives showed off the interior of the building as well as demonstrated its ability to handle flight operations.

“It’s a really important day to share with you some of the progress and to declare operational readiness for Spaceport America,” said George Whitesides, chief executive of Virgin Galactic, at the event.

That operational readiness includes the ability to support flight operations by the company’s WhiteKnightTwo aircraft, named VMS Eve, which flew to the spaceport from the Mojave Air and Space Port in California Aug. 12. During the Aug. 15 event, WhiteKnightTwo spent more than an hour in the air, simulating the flight profile for a mission that would release SpaceShipTwo.

That flight was operated from a new mission control center within the “Gateway to Space,” the main terminal building at the spaceport. Mike Moses, a former NASA shuttle manager who is now president of Virgin Galactic, said that unlike shuttle astronauts the pilots of WhiteKnightTwo and SpaceShipTwo have access to all the data they need to fly the vehicles. “We use our mission control more as a support role,” he said, taking on various tasks to free up the pilots to fly the vehicles.

Company officials said they’re happy with both the spaceport facilities and operations. “We were practicing one of the two different routes we’re going to use when we fly SpaceShipTwo,” said Virgin Galactic flight director Bill Kuhlemeier of this latest flight, including getting used to coordinating airspace with both the Federal Aviation Administration and nearby White Sands Missile Range. The flight also tested systems for transmitting telemetry from the vehicle directly to mission control.

The testing of WhiteKnightTwo and the spaceport facilities is part of a final push by Virgin Galactic to complete testing of the suborbital spaceflight system and begin commercial operations some time next year. In May, the company announced it would start to shift operations from Mojave to the spaceport, with support staff making the move over the summer to New Mexico.

“We’re now well along in our transition,” Whitesides said, with 89 staff members having moved so far to New Mexico, with another 50 to 60 personnel expected to move in the near future. “That’s good news for the state, and good news for our operational readiness.”

Virgin Galactic’s existing SpaceShipTwo vehicle, VSS Unity, remains behind in Mojave. Moses said in an interview that the company is continuing to outfit the cabin of the vehicle for commercial flights. Some additional work is also underway on the vehicle, including replacing an analog flight control system with an improved digital one that the company was already planning to use on later SpaceShipTwo vehicles.

Virgin Galactic didn’t give a date for when it expects SpaceShipTwo to arrive at the spaceport — WhiteKnightTwo will return to Mojave to fly it to New Mexico — but that when it arrives the company will start with a couple of glide flights to test those upgraded flight controls and to get familiar with the airspace.

Once those are done, “we’ll be ready for rocket-powered flights,” he said. While there is no set number of powered test flights planned before SpaceShipTwo is ready for commercial operations, Moses noted there are currently eight hybrid rocket motors stockpiled at the spaceport.

Two other SpaceShipTwo vehicles are under construction in Mojave. Moses said the first of those two should be ready to begin flight tests in 2020.

Virgin Galactic also used the event to show off the new interior of the Gateway to Space facility. While the building was completed in 2011, much of its interior was left unfinished for years as the company focused on development of the launch system. Only in the last year did the company start work fitting out the interior of the building for its various roles.

The bottom level of the building, which the company dubbed “Gaia,” will serve as a lounge for both staff and guests, and features an upscale dining area. The second level, called “Cirrus,” is home to mission control and other offices for technical staff and pilots. The top level, still unfinished, will be where the company’s customers prepare for their flights.

One of Virgin Galactic’s pilots, Mike “Sooch” Masucci, said he was pleased with the layout of the Cirrus level, including the large windows that cover one side of the building that provide a view of the runway. “It keeps us motivated, but more importantly, keeps our heartbeat on what’s going on outside,” he said.

As for the name of the level, taken from a type of high-altitude cloud, he said, “Pilots in the cirrus makes perfect sense.”