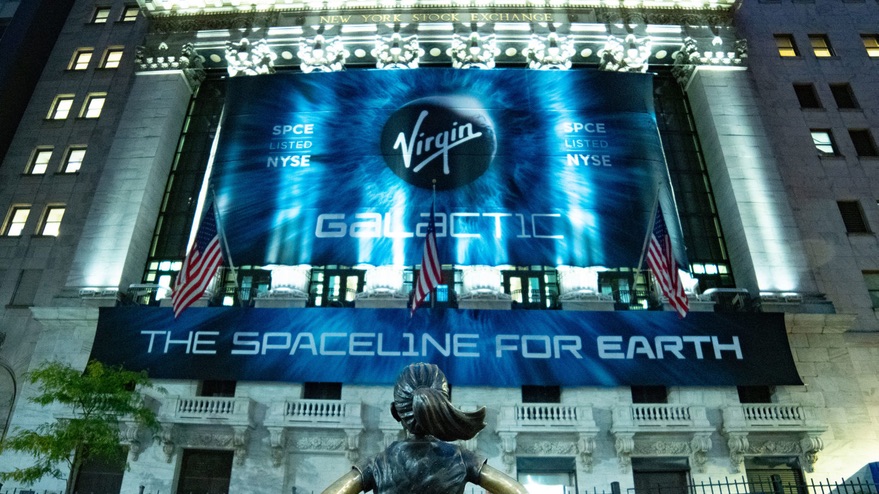 HOUSTON — Nearly a month after Virgin Galactic’s debut on public markets, the investment community is largely taking a wait-and-see approach to whether it will be a model for other space companies seeking to go public.

Virgin Galactic started trading on the New York Stock Exchange Oct. 28, three days after it closed its merger with Social Capital Hedosophia, a special-purpose acquisition company that was already publicly traded. While not a traditional initial public offering (IPO) of stock, that deal was given the publicity of one, including an appearance by Virgin Galactic founder Richard Branson on the floor of the exchange.

The company’s stock, traded under the ticker symbol SPCE, has not fared particularly well since its debut. Shared closed Nov. 22 at $7.60, a decline of about 35% since it opened trading at $11.75 a share. That included sharp declines in the past two days of trading, despite a positive rating by Credit Suisse Nov. 21, who concluded that the company would have a “near-term monopoly” on the space tourism market once SpaceShipTwo begins operations in 2020.

Even amid the hoopla of its debut, Virgin Galactic executives emphasized they would maintain a long-term focus. “I’m think we’ve been lucky to get some really good long-term shareholders,” George Whitesides, chief executive of Virgin Galactic, said in an Oct. 28 interview. “Those are folks who are excited about the mid- to long-term potential of the company. Hopefully they’ll be encouraging us to pay attention to the right things.”

Four weeks of trading for a company yet to begin commercial service is not enough to draw conclusions about the viability of both Virgin Galactic and the broader industry, financial industry experts conclude. “A lot will depend on how it does,” said Ed Eppler, global head of aerospace and defense at Goldman Sachs, during a panel session at the SpaceCom Expo here Nov. 21.

The completion of the merger with Social Capital Hedosophia, though, provided Virgin Galactic with more than $430 million in cash, funding the company has previously said is sufficient to take the company into commercial operations next year. Financial projections as part of investor presentations prior to the merger forecast the company will have positive earnings before interest, taxes, depreciation and amortization, or EBIDTA, in 2021.

“They’ve got some pretty steep forecasts,” Eppler said, arguing the company has to demonstrate its ability for “turning and executing on their business models and migrating towards revenue growth and a path to profitability.”

Virgin will have to do so to meet the expectations placed on it by the market. “So far, I think it’s been able to sustain a relatively lofty valuation based on the aspirations around both space tourism and an innovative launch technology,” Eppler said. Despite its recent declines the company still has a market cap of about $1.5 billion.

Whether other entrepreneurial space companies follow Virgin Galactic’s path to go public will depend on Virgin’s success. “The market tends to be influenced by what happened last,” said Myles Walton, managing director of aerospace and defense equity research at UBS. The market, he said, “will be focused like a microscope on its success or setbacks.”

Walton hinted that other space companies might consider public offerings in the future, but did not name any specific ones. Eppler said that he expected to see more merger and acquisition (M&A) activity, particularly from larger companies that are interested in technologies startups develop.

“We certainly see our defense prime customers are very interested in tracking all of these new space ventures,” he said. “I think you’ll see some M&A exits, as some incumbent players seek to leapfrog technology.”

How Black users are saving Clubhouse from becoming a drab hangout for tech bros
We may have dog friends because wolves once preferred different food, study suggests
General Motors unveils EV van as part of new commercial business unit
Search for better COVID vaccines confounded by existing rollouts
Astronomers have identified another important aspect of planets that could host life