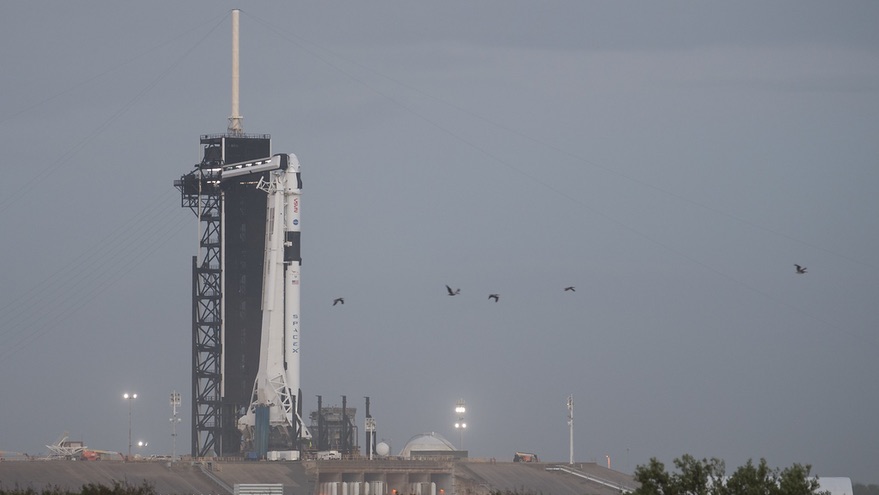 WASHINGTON — NASA has postponed the launch of its first operational commercial crew mission by a day, citing weather conditions that delayed the arrival of the droneship used for the recovery of the Falcon 9 first stage.

NASA said Nov. 13 that it was pushing back the Crew-1 launch by one day, to Nov. 15. Liftoff from the Kennedy Space Center’s Launch Complex 39A is scheduled for 7:27 p.m. Eastern.

In a tweet, NASA Administrator Jim Bridenstine said that “onshore winds and recovery operations” prompted the one-day delay. The latter was an reference to the location in the Atlantic Ocean where the Falcon 9 first stage will land on a droneship. NASA plans to use that stage for the next commercial crew mission, Crew-2, launching in the spring of 2021.

“Fundamentally, it was an issue of getting the droneship there in time,” said Benji Reed, senior director of human spaceflight programs at SpaceX, during a briefing late Nov. 13. The ship’s departure was delayed by Tropical Storm Eta, and high seas kept the ship from moving fast enough to get to the recovery done in time. “We’ll be getting there in plenty of time for a Sunday launch.”

Weather for the launch itself was favorable, with forecasts projecting a 70% chance of acceptable weather for a Nov. 14 launch, decreasing to 60% on Nov. 15. Those probabilities, though, only reflect launch weather conditions and do not take into account upper-level winds or conditions at both the booster recovery site or abort locations in the Atlantic.

At a press event earlier Nov. 13, Bob Cabana, director of the Kennedy Space Center, said teams were working “no serious issues” technically with the rocket and Crew Dragon spacecraft.

Crew-1, billed as the first operational commercial crew mission, will carry NASA astronauts Mike Hopkins, Vic Glover, Shannon Walker and JAXA astronaut Soichi Noguchi to the International Space Station for a six-month stay. A launch Nov. 15 would have the capsule docking with the station around 11 p.m. Eastern Nov. 16.

Bridenstine, at the media event, defended the use of “operational” even though this is only the second flight of the Crew Dragon with astronauts on board. “When we think about flights to space, we take all of them with great precaution. We take them very seriously,” he said. “Every bit of attention that we have on a test flight we also have on operational flights.”

That event also discussed another issue tangentially related to the launch: comments by SpaceX Chief Executive Elon Musk on Twitter early Nov. 13 where he said he had received conflicting test results, both positive and negative, for COVID-19. Musk also reported having mild cold-like symptoms.

“When someone tests positive for COVID here at the Kennedy Space Center and across NASA, it is our policy for that person to quarantine and self-isolate, so we anticipate that will be taking place,” Bridenstine, adding that he expected SpaceX to do any contract tracing. It was unclear if Musk has recently been at the center, and agency officials said the Crew-1 astronauts have been in quarantine and not in contact with Musk.

Should the launch not take place Nov. 15, the next opportunity is Nov. 18, due to unfavorable trajectories and a spacewalk planned by the station’s two Russian cosmonauts. Launch weather that day is slightly more favorable, with an 80% chance of acceptable conditions.

Covid-19, Funding Shortages Affect Malaria Progress In High-Burden African Nations
Scientists propose a brand new periodic table, and it’s a trip
SES to provide satellite connectivity for U.S. military ‘internet of things’
Google and Facebook to be scrutinized by new U.K. antitrust unit from next year
Airbnb seeks valuation of up to $35 billion in its IPO